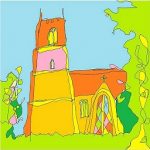 Friends of St James (FoSJ) was formed by concerned villagers, in 2012 as a secular*1 charity,  at a time when the church was under threat both from dwindling congregations and a lack of funding. Urgent structural repairs and improvements were required in 2011 to prevent the church from serious decline and there was a very real risk that this cornerstone of village life might be lost.

FoSJ is completely separate from the Parochial Church Council*2 (PCC) not to be confused with the Parish Council (PC), but works with the PCC in matters of improving the structural integrity of the church.

A questionnaire to the village, back in 2011, indicated the strength of feeling for ensuring that St James remained at the heart of village life both in a religious sense but also, importantly, from others that wished to both preserve the heritage of the building and see its use extended to the wider community.

It is well worth reading the original minutes from this meeting as they embody an energy and a village spirit of positivity towards the future of the church.

The address by Andrew Mottram, from English Heritage, was particularly inspiring in providing a fascinating historic perspective on how churches were used in the middle ages. I urge you to read his words here.  Many surprises are to be found therein.

Since 2012 over £76,000 has been raised by FoSJ trustees via successful direct grant applications, donations and annual subscriptions.

This money has been used to fund many of the original needs identified plus many more improvements. You may examine the detail of how the money was spent here.

However, much work remains to be completed and therefore financed. The main issue, and most expensive to be addressed in the next few years, is the roof. The Five Yearly structural survey report (Quinquennial) paid for by the Church of England estimates that roof repairs alone will cost in the order of £43,000. This, together with other matters identified, totals over £78,000.

You may examine the detail here.

*1 Secular: (Oxford English Dictionary): ‘of the world, and not influenced by any religion’

*2 Parochial Church Council: Church of England’s National Stewardship & Resources team):  ‘The principal function, or purpose, of the PCC as “promoting in the parish the whole mission of the (Anglican) Church’.